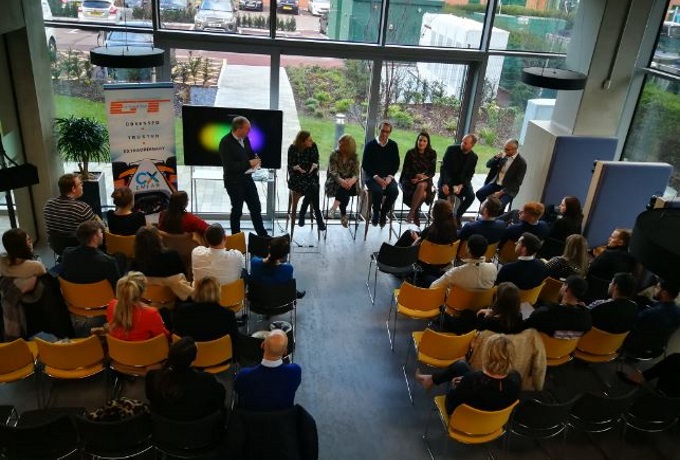 On the 12th of December 2018, a group of current and budding tech professionals gathered together at the Bright Building in Manchester Science Park for what was billed as a lively debate between industry experts and interested parties, to address the United Kingdom’s worrying lack of young men and women taking up careers in the technology sector.

The Afternoon began in causal manner with a round of finger food and pre-schmoozing in the Bright building’s futuristic surroundings. Guest were then ushered to their seats, ready for the event to commence.

The panellists for the event were Rose Marley: CEO of Sharpfutures; Will Akerman: founder of MykindaFuture, Tara McDaid: a member of Cisco’s country leadership board; Damian Payton: founder of Hive, Ali Hawksworth : a Cisco executive and finally Phil Baker: an executive of Cisco Men for Inclusion (MFI). Conductor and Chief for the whole event was one of Cisco’s very own Alistair Wildman.

As the first round of questions were fired off what became apparent was that even though a lot of the event was focused on female gender diversity, the executives’ perception of diversity stretched far beyond just the female sex. They’re concerned that at a time when the United Kingdom is more multicultural than ever, the people producing the technology for said culture aren’t representative of it; that’s a problem if you’re seeking to make technology with any sort of mass appeal.

The event touched upon the fact that young women have an aversion to tech roles. Damian Payton reading of the situation is “there’s a shortage of young people taking up computer science as a subject in school or. Girls in particular fear choosing coding as an A level because they’ll be surrounded by a class of boys”.

This idea of girls staying clear of tech based subjects grew some legs when one of the attendees present at the event Helen Douglas, interjected with her findings. Helen runs a scheme called “People like me” in which she goes into schools and runs workshops wherein kids are separated into groups based on whatever features they have that stand out, she then asks the kids to say what they see, “what’s obvious about the other group of kids?” this of course is to help build a dialogue about their differences; The kids then fill out a questionnaire from which the results are used to discover what skills the kids have. Helen describes a situation where she’d say to girls “you’re a teacher or you’re good at sports, but they’d refuse to believe it, only when I got their friends to reinforce the findings ‘actually you are good at …’ it’s then they’d agree with the findings” Helen went on to claim that throughout her years of doing  this she’s found out that in the case of young girls there is an unconscious bias at work. This happens at the age of five and again at the age of nine and thirteen. “It’s not how we perceive others it’s how we perceive ourselves.” Rose Marley herself thinks “there’s gender stereotypes we must all take responsibility for”.

When boys and girls do want to pursue a tech career , the career advise provided to them isn’t helping the situation at all or as Damian Payton put it “the careers advise is terrible, there’s a problem with the subjects kids are encouraged to take….only one in ten girls at school choose to take computer science.” To add some variety to the discussion the host Alistair Wildman got some of the guests involved particularly a group of young apprentices from Rose Marley’s Sharpfutures, after all if you’re trying to change the future why not hear from the future. The Sharpfuture’s bunch echoed Damian’s sentiments  their careers advise was substandard ,some went as far as saying, in high school they thought the only apprenticeships available were for manual labour jobs like mechanic s or construction.  Sharpfutures employee Ihtezaz Anwar Claimed he went through the entire educational system but the best role a web developer degree could secure him was a warehouse operative; until he heard about SharpFutures.

As the discussion delved deeper into the topic the panellist combined years of experience begun to shine light upon lesser known stumbling blocks in attracting young people to tech. For instance if Rose Marley saying  “kids do what’s expected of them from their families” if that’s anything to go by then we should never underestimate how the weight of expectations can lead kids down the more conventional career route. When given further consideration this isn’t really shocking, the kids of today parents grew up in an era where the internet was in its nascent period, they see the Snapchat, they see the Iphone in the palm of their hands, but they can’t see how working as a tech specialist can be a long lasting career.

However the CEO’s and company executives are as frustrated as everyone else about the lack of diversity. To hear Phil Baker say “we want to attract diverse talent because we see the same type of people at interviews” was quite refreshing.

That said and done how can these companies rectify it? Will Akerman proposed employers trying to reach the kids earlier “schools prepping children for employment through a collaboration between schools and employers can fix that” and that’s exactly what his company does. : MykindaFuture is an organisation which aims to connect young and ambitious young people to employers, building a bridge from their first year of school to their first year of employment, primarily through schemes such as apprenticeships and internships.

Damian Payton suggested going a step further by bypassing the whole school system through his company Hive “we’re creating opportunities outside of schools where employees meet kids.” In a sense that’s Hive’s main ethos, they’re an organisation devoted to creating digital marketing openings for young people in greater Manchester, through one a hour or week long workshops which familiarise kids with the digital landscape and build genuine interest.

Tara Mcdaid put forward the Cisco model as one that could be emulated by companies in an attempt to bring more female diversity to their company “I’ve been at Cisco for 19 years and we are now in the midst of our largest transformation, it’s transformation which means Cisco has a 50/50 male/female leadership.” In her role as a member of Cisco’s country leadership board she leads and mentors young people in the Manchester technology sector, she’s also a key component in Cisco’s Digital strategy commitment to have 250,000 digitally skilled young people by 2020.

One way in which Cisco has tried accomplish this is through their collaboration with SharpFutures. SharpFutures is the brainchild of Rose Marley and one of Manchester’s fledgling media companies dedicated to ensuring that young people from underprivileged backgrounds gain in roads into careers in digital media that would otherwise be unattainable. SharpFutures POD helps young people get their self in the door at some of the most prominent media giants in the United Kingdom, through schemes like apprenticeships and work placements, it’s a proven system that’s resulted in hungry young people gaining permanent employment in the creative digital and technological sector.

In closing Rose Marley stated something quite pertinent “we’ve got to make a generational shift, to pave the way to go through the change. It’s going to take a long time but we shouldn’t be discouraged“.

Once the event was finished and the reviews were in, there were some interesting opinions being tossed around, Helen Douglas who had been so vocal during the event remarked that “at first I was pleased with the audience interaction which was aided by the size and intimacy of the gathering”.

James Trant, a school partnership manager for MykindaFuture thought “an event like this is good because it bridges the gap between young people and employment and brings together both for a meeting of the minds.  Kerry Branon felt the event led to some deep self-reflection “it made me question am I bias with my girls”.

What’s apparent from Talent in Tech is there is no blue pill to the issue, rearranging the disproportion in the tech industry is a long arduous task but one that can be achieved nevertheless through an open line of communication from both parties, and Talent in Tech brought that goal one step closer.