What Is the City but the People? Manchester International Festival (MIF)

Created by the People of Manchester. Directed by Richard Gregory. In association with Islington Mill. From an idea by Jeremy Deller.

This year’s Festival opens with an invitation – come to Piccadilly Gardens and join friends, neighbours and total strangers for this self-portrait of the city.

Raised high above the pavements, a unique selection of individuals from across Manchester will walk along a runway stretching more than 100 metres through Piccadilly Gardens.

As the working day ends on Thursday 29 June, MIF17 starts. All eyes will be on the people of Manchester as they become the opening event of the Festival.

With live music from Graham Massey assisted by an unexpected mix of local musicians, What Is the City but the People? will capture and celebrate Manchester as never before.

Get involved  We’re building a runway in Piccadilly Gardens. Want to walk it? Tweet a selfie and tag #whatisthecity & tell us why you should be up there!  Visit whatisthecity.co.uk to register your interest.

Commissioned and produced by Manchester International Festival. Supported by Arts Council England’s Ambition for Excellence and My Festival Circle. 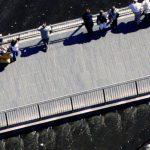