The Rutherford Gallery – A Gallery dedicated to Harry Rutherford in Tameside.

Harry Rutherford was a nationally renowned artist who came from the Tameside area. His career was long and varied, working initially as a draughtsman and then training with the eminent artist Walter Sickert.

The Rutherford Gallery situated in Central Art Gallery is a celebration of a 20th century master, an artist whose talent allowed him to experience many avenues of artistic life. The works on display will span his entire artistic career. Many will have never been on public display before.

View highlights of the Rutherford collection. 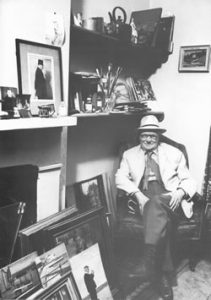 Born in Denton in 1903, and based for much of his life in Hyde, Harry Rutherford has often been identified as one of the unsung heroes of the Lowry generation. A follower of Walter Sickert, Rutherford’s work always demonstrates an uncanny knack of distilling the moment.

Rutherford attended Hyde School of Art on Saturday mornings whilst still at school, and on leaving joined the Manchester School of Art where he was taught by Walter Sickert and became a contemporary of LS Lowry.

He worked as an artist for a Manchester advertising agency and later a topical cartoonist by the Manchester Evening News. He then worked in London as a freelance artist and illustrator on Fleet Street for many magazines. In 1936, he worked on a cover for the magazine The Listener, introducing him to the world of television. A BBC producer was so impressed with Rutherford he employed him to stand in the studio wings for his programme Cabaret Cartoons drawing variety acts as they performed.

Following the war, Rutherford hosted his own children’s television show, Sketchbook, in which he pioneered art live on television long before artists such as Rolf Harris or Tony Hart had made their screen debuts.

Rutherford returned to Hyde in Greater Manchester in the 1950’s and was employed as a teacher of Art at the Regional College of Art in Manchester until his retirement in 1968. In 1961 he was elected president of the Manchester Academy of Fine Arts, a post he held for eight years.

Rutherford travelled extensively in his life, to Spain in the 30’s and in the 50’s he travelled across Europe and to Borneo as a guest of the British Council. Loyal to his local community he kept a studio in Nelson Street next to the house he kept with his brother Donald. Although due to ill health he painted less in his later years, he still remained an active member of the community and painted some of the most significant and insightful paintings of life in the local area. His work is of national importance due to his significant place in the development of British twentieth century art and the contribution he made to the history of television. 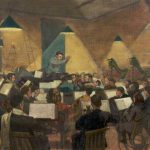 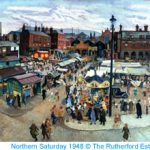 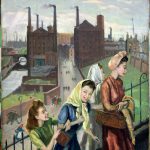 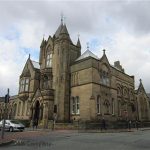 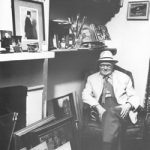