Hive Code Camp is Manchester’s new summer club for digital making! Beginners and confident coders aged 13 to 18 are welcome along for a week of fun activities where you’ll learn – or power up – tech skills.

Each day will have a mix of activities, run by friendly trainers. You can work in a group that suits your level and no one will be left behind. People who want to leap forward will have ace mentors helping.

Build your own platform game. Mix games to make a mega-game. Make Minecraft work for you like never before.

Make a robot then battle it out with others to dominate the arena. It’s not all about size and power – sometimes skills and strategy win the day!

Got an Amazon Echo or Google Assistant to do silly things yet? Well this session is about getting your very own personal assistant to do something useful.

Now computers are no longer room-sized, they’re good for doing things on the move. If it’s not raining we’ll go out and unleash the power of mobile devices. You could make an app in a day.

Activity 5: The Internet of Things

‘One day our fridges will rise up and take over!’ That’s some people’s nightmare vision of the Internet of Things. We’ll show you what it actually is.

HTC’s Vive is one of the best VR setups and we have one! Have a play in a virtual world, with Google’s Tilt Brush. Is this all new to you? Yes, us too, let’s try it out together!

What, at a code camp? Yes. Brains don’t work by sitting around all day. So we’ll have odd times when you get away from your screens and do something different. Don’t worry, nothing embarrassing or difficult…just not sitting. Did you know you can learn computing through movement and physical games?…

Coders run of caffeine and sugar, right? Nope. Like everyone else we need good fuel to do good work. So there’ll be free fruit and drinks on hand all day.

Gone are the days of coding alone in a dark room like a little mushroom. At Code Camp we’ll help you work with other people. Come as a group or we’ll match you up. It’s a lot more fun that way, you’ll learn better and build friendships.

Code Camp is brought to you by Manchester’s Hive Learning Network, the people behind Manchester’s youth hacks and various other things. Our volunteers are from places like Hack Manchester, Coderdojo, Code Club and local tech companies. The organisers are DBS-checked and experienced in running digital youth activities. 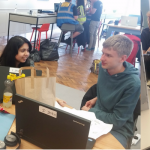