After the grand final at Albert Hall in September, Art Battle Manchester goes off-the-beaten-track for its second series of painty skirmishes at the former cotton mill and ammunition factory – Talbot Mill.

‘There’s Trouble at T’Mill’ will feature 10 new fearless artists. A capacity crowd will watch painters, illustrators, tattooists and street artists go head-to-head in what has been described as the city’s most energetic art event.

With only 30 minutes to create a masterpiece – YOU will decide who is crowned Champion. In addition to the art and music, expect some unexpected shenanigans…

Since 2013, Art Battle Manchester has delivered 11 SOLD OUT battles across the city in mills, warehouses, music venues, theatres, a skatepark and even an old fire station.

This event also includes music and often live entertainment and performances in between battles. Open to anyone interested in Art, this is an informal event with a good opportunity to socialise; as well as purchase the masterpieces which are auctioned off towards the end of the event. Profits go to charity and the participating Artists.

You can find out who the 10 participating Artists are and see examples of their Art work via Twitter and Facebook. 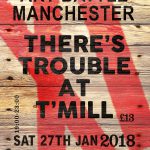 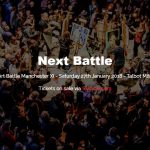